The club was formed by the late Mr David Jones in 1970 to provide football for the children of the village and was consolidated by the late Mr Bob Wilson who is remembered during the presentation evenings with awards presented in his name.

The club has now developed into one of the top junior football clubs in the area. From the early days of one team wearing borrowed kit they now field boys’ teams at every age group and also a have a thriving girls section. The club’s open policy enables all children to participate in the activities provided. It ensures everyone has a chance to be involved in football, regardless of ability, race or religion. It also encourages the involvement of groups at all levels of football by recognising that inequalities exist and taking steps to address them.

Many players use the club as a springboard to adult football and currently there are many ex Llanymynech Juniors players playing in English and Welsh Leagues.

The teams use a number of local facilities including Carreghofa School, Bryn Offa School, Moreton Playing Field, Llanymynech Playing Field, Four Crosses Community Field & Marches School. The club is indebted to the owners of these facilities for their help and support.

The club is reliant on volunteers to coach the teams and for the committee posts including secretary, treasurer and chairman. Many of the coaches are former players at the club who have returned to repay the efforts of past managers. All managers require coaching training, police checks and child protection certificates before they can take up their positions ensuring quality coaching continues to be provided at the club. The club also relies on the parents to provide support including transport and acting as assistant referees.

Money is raised through membership fees, events and also through sponsors as well local and national organisations such as the Local Development Fund, the Football Foundation, Barclays and BT. The money goes towards equipment, insurance, league fees, training facilities, referees and coach development.

Although the main aim of the club is to encourage participation regardless of ability it continues to find success on the field. The various teams have won Leagues, League Cups and Consolation Cups in recent years as well as winning the Shropshire Charity Cup three years in succession during the 90’s including a memorable victory at the Gay Meadow.

The club has developed new changing rooms at Llanymynech in co-operation with the Village Hall and the Football Foundation, and has more recently formed a strong relationship with Hope House. 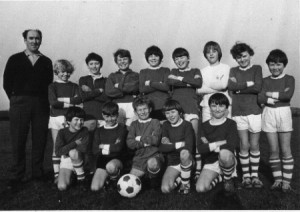